House Speaker Robert A. DeLeo won his first political victory with the 108-to-51 vote, persuading lawmakers to sign onto his plan to increase the sales tax from 5 percent to 6.25 percent. The vote also heightens the tension among top Beacon Hill Democrats, who have had sharp disagreements over how to solve the state's budget crisis.

Patrick opposes the plan and sent an ultimatum to all 200 members of the Legislature yesterday afternoon, promising to veto the increase unless lawmakers first enact transportation, ethics, and pension law changes he has sought.

"While I recognize the need for revenue, raising taxes of any kind during a recession is a bad idea," Treasurer Timothy P. Cahill, who has not ruled out challenging Patrick, said in a statement.

Keep in mind, Massachusetts is receiving $3billion in federal bailout funds from our federal government. And they won a scare tactic campaign victory in November by scaring voters into voting against an income tax rollback.

Treasurer Cahill's remarks highlight the problem with politics and an uneducated public: the problem isn't revenue generation, it's spending. The problem in Massachusetts has always been and will always be spending, not a lack of revenue. Toll roads, high excise taxes, high property taxes, high sales taxes...the state gets plenty of revenue. It just doesn't know how to spend it effectively.

And Deval, while I like what he's doing, the causes of his action are problematic. Per above, he's essentially saying, "I won't allow a tax increase unless you tell me I can spend it any way I want."

The politicians running our state have left the voters and citizens completely out of the political process. I hope to leave Massachusetts at some point when it makes sense, both career and family-wise, and let the socialists infect the entire state before it collapses. We're at the point of no return: it's easier to let things fall apart so we can build anew than try going back to the values upon which this state was founded.
Posted by Frank at 11:54 AM No comments:

In a shameful move by a shamefully & poorly managed US auto company, GM is now asking the government to completely take over the company so it doesn't have to run itself - nor confront the unions it plans to phase out:

GM is living on $15.4 billion in government loans and faces a June 1 deadline to restructure and get more government money. If the restructuring doesn't satisfy the government, the company could go into bankruptcy protection.

GM said in a news release that it will ask the government to take 50 percent of its common stock in exchange for canceling half the government loans to the company as of June 1.

If both are successful, the government and UAW health care trust would own 89 percent of the company's stock, with the government holding over a 50 percent stake, Henderson said.

I would rather see GM go out of business or at least substantially reduce its product offerings (more than just slashing Pontiac; think much bigger - or smaller, as the case may be). The government should not be in the business of making cars for profit. And since the government will realize this soon too, taking over 50% of the company's stock (read: operational & financial decisions) means we're slowly getting on the path of government taking over all industry. Alarmist? Apocalyptic? OK maybe a bit too much melodrama to make such a leap, but it's still frightening for those of us who value good old fashioned hard work in our industry here in the States.

My only hope is that a strong state like Texas secedes from the union and shows the other 49 how it's done. Only that type of action will finally convince people that a heavily centralized federal government, which should not be in the business of bailing out or taking over industries to the point where those companies are given a lifeline just long enough to BEG the government to put it out of its misery as an independent for-profit going concern, has no place in this country.

If this (or something like it) doesn't happen? I fear the socialism bug that has infested too many countries in Europe, and spread all too easily via the EU.
Posted by Frank at 10:22 AM 2 comments:

"The Department of Health and Human Services has declared a Public Health Emergency as a precautionary tool to ensure that we have the resources we need at our disposal to respond quickly and effectively," Obama told a gathering of scientists, amid increasing worries worldwide about a possible pandemic.

In the United States, a private school in South Carolina was closed Monday because of fears that young people returning from Mexico might have been infected."

Reverse colonization never took such a hard blow. A Mexican illegal is on the border, right now, hearing word about this, and has one foot in one country and one in the other. Maybe his thought process would go something like this: Go into the US at risk of swine flu but free medical care; go back to Mexico at risk of swine flu and not-so-great medical facilities.

Damn…I don't think this changes much about our illegal immigration issue.

It does highlight a couple of important points though, and people tend to largely ignore these in the politically heated debate about illegal immigration:

The other, somewhat hilarious part about the article referenced above is that it's implied we'll now be doing "border screening". Really, even for those who sneak through and are never seen by Border Patrol? That'll work...

Working out and eating MEAT

My friend JF and I get into a good workout routine when the weather brightens in the spring, making it a point to go running on nice days during our weekly get-togethers so as to counterbalance the potentially filling/heavy food & drink we will consume later.

We're lucky enough to live in a great area of Massachusetts, so we run a 2.25 mile route (when we're in better shape, 4.5 miles - twice around) around a pond which is right nearby a Whole Foods & a liquor store. The events of last evening were as follows & are becoming regular, and are also depicted below:

It's still early spring, so it's nice to know there's a good few more months of this type of activity left. Nothing like a man/meatfest to end a week! 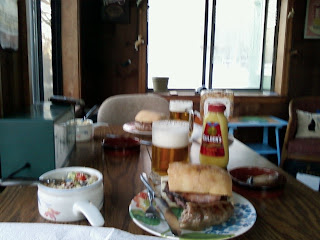 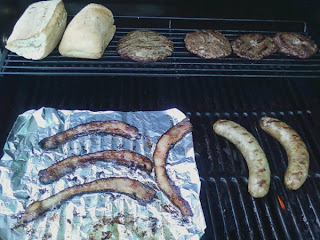 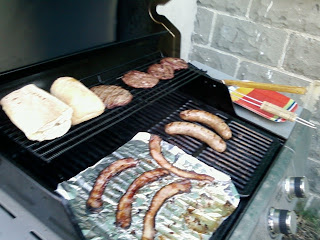 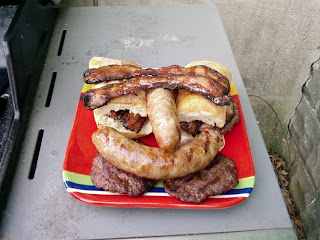 US Naval fleet falls apart before our eyes

"Greatest military force the Earth has ever seen", huh?

WASHINGTON—The piracy crisis over a lone hostage in the Indian Ocean took on the familiar air of a cops-and-robbers standoff, with the U.S. Navy seeking advice Thursday from seasoned FBI negotiators.

Their goal: Resolve the incident without military force.
As the FBI joined the delicate negotiations, the shipping company Maersk said that the safety of Capt. Richard Phillips is its No. 1 priority. Barack Obama, facing one of the first national security tests of his presidency, declined comment Thursday when asked about the standoff.

So our Naval fleet, instead of using force to ensure this humanitarian aid ship can get on with its business, is enlisting the help of FBI negotiators? That must be comforting to the hostages.

Instead of being overly tolerant of moron "pirates" who fancy themselves heroes, kill them with long-range sniper attacks and salvage what you can of the vessel.

Navy SEALS shot three of the pirates in the head, killing them, using only three bullets. Good work! Unfortunately, we'll now have to listen to the liberal media talk about the poor, poor Somali pirates and how they're not really at fault because they were abused as children...look for that on Nightline within a month or two.
Posted by Frank at 11:23 AM No comments:

SALINAS, Calif.—A California man accused of selling his 14-year-old daughter into marriage for $16,000, beer and meat has pleaded no contest to felony child endangerment.

Marcelino de Jesus Martinez had pleaded not guilty in February to procuring a child for lewd acts, aiding and abetting statutory rape and child endangerment. If convicted of those charges he faced 10 years in prison.

Martinez went to police to get his daughter back because payment wasn't made.

Got that, people? Father sells daughter for beer & meat, doesn't get paid, the complains to the police.

Instead of locking him up on my taxpayer dollar, why not throw him out of the country all sliced up and what not? Take a knife to his face, maybe even carve an obscenity in there, let the 14 year old daughter do it, and put a GPS tracking device on this goon so we know when he tries to enter the country again?

If these types of hard lines are taken with scum like this, do you really think illegal immigration - especially the absolute WORST countries like Mexico have to offer - would be a problem?
Posted by Frank at 12:38 PM No comments: