My only complaint is the inability to use Statcounter to check referring links and all of that garbage, but I'm sure WP will come out with that functionality soon.  Besides, no one ever comes here...
Posted by Frank at 11:58 AM No comments:

I'm toying with the idea of moving the whole kit 'n caboodle to Wordpress.  I've been blogging with Amerika.org for over a year now and find Wordpress' tools to be more robust and simpler than those of Blogger.

The new composition tool in Blogger sent me over the edge.  Minor updates and it's buggy at that, I never have problems composing in WP.

Wrote this short bit last night.  There will probably be more, not that anyone would ever want to read it.  Enjoy.

Quade vs. Quaid - Part I

On Opening Day 2011, Mike Quade, new manager of the Chicago Cubs, found himself matching managerial wit with an opponent not of this planet.  At least, his opponent hadn't been on Earth in some time. 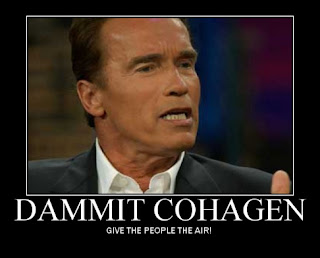 Angry that he was not selected for the Cubs managerial position, Douglas J. Quaid, formerly of the Mutant Colonies, returned to Earth to manage the rival Phillies.

Quaid, of course, grabbed headlines as soon as he landed.  He had been the hero of the revolution on Mars, and even managed to fix up his old friend Kuato after what he thought was a fatal blow to the head.  Those mutants really heal.  Unfortunately, Vilos Cohagen had also made it out alive - barely - and no one knew where he was hiding.

Why was a revolutionary hero returning to Earth from his prominent position of Grand Chancellor to manage the Phillies?  Quaid speaks, in an oddly Austrian accent.

"I knew it was my time to make a run at the bigs.  Quade took a job I really wanted. I spend some time in Chi-town growing up and thought I was a finalist for the job, but things didn't work out.  Or maybe I misunderstood when I read the papers and thought they just misspelled my name?"

Quaid didn't handle every interview leading up to the season opener against - you guessed it - the Cubbies with such grace.  He had previously called Mike Quade a "faggot", "loser", "sissy", and most recently, a "mutant fuck".  Mike Quade responded in kind.

"I know what Doug Quaid has done for the Colonies, and that's just fantastic.  Whoopie, yah-huh.  But aren't we forgetting that Mr. Quaid has no experience as a baseball manager in any league?  War hero, sure -  I wouldn't know, I never had an interest in Mars or their tribidium.  Ball club manager?  We'll see."

We skip to Opening Day, and Quaid is ready.  He's even recruited some help from afar - despite MLB's objections to a Martian national hiring an entire coaching staff to coach a Major League club. Quaid points out that players from Cuba and other places are allowed to play in the big leagues with not so much as a sniff in the direction of their citizenship documentation, so why can't he manage if the Phils want to hire him?  No one in the ultra-tolerant American Federation dares speak against this crowdlogic.

It's the 8th inning, and Quaid is restless in the dugout.  The Cubs are down by only a run with their big bats coming up in the next inning.  Starter Halladay has had a good afternoon but let up a single, a walk, and a fly bloop in order after struggling to make his second fly out.  When Halladay walks the bases loaded in uncharacteristic fashion, Quaid makes his move.

As he approaches the mound, Halladay pretends not to notice him.  Not yet, Halladay thinks.  Not yet.  I can't give up the rock for some monstrosity of a player from another goddamn planet.  But he has no choice, and very rarely do pitchers fight their manager's decisions publicly - he didn't want to get the year off to a bad start. 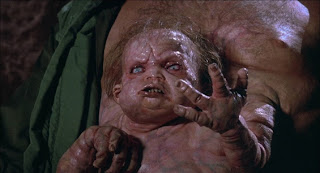 Quaid looks toward the dugout.  There, being photographed by the entire press, it seems, is Kuato, warming up in the bullpen with high-flying meat:  102-mph fastballs with good movement.  MLB never had rules surrounding a player who uses another human body as a shell, so they had to let him play.  Halladay thinks to himself, "they better put a stop to this shit right quick or I might as well go there and get myself a Kuato of my own for relief.  Then I'd never have to leave the fucking mound."

Quaid touches his belly.  Not his left arm or right arm, but his belly.  Halladay pukes on the mound - this is too much, he thinks.  Quaid looks over matter-of-factly.  "Looks like you ate some PIE before the game, eh Roy?  You gotta work on that.  Now gimme the fuckin' ball - you pitched a hell of a game but we're gonna let my own personal George Washington bring this shit home."

As Halladay returns to the dugout to a standing ovation, his face turns greener and he nearly doesn't make it before he has to puke in the Gatorade bucket.  Really?  A pitcher who comes out of the thorax of another guy?  How is this possible or even in accordance with MLB rules?  How does the windup work?

Then, there's a bit of a distraction, allowing Halladay enough time to compose himself while Kuato strolls out to the mound via his human shell.  A crazed man with huge eyes, broken blood vessels, and swirling gray hair storms the field with a knife, in an apparent attempt to assassinate Kuato.  Quaid steps right in, as he thinks to himself that he's seen that look, that face, those broken blood vessels before; side-stepping none other than Vilos Cohagen, tripping him, and then pulling out a contraption and strapping it to his face.  It's a depressurizer - the devices you find on Mars to ease back into an Earth-like environment should you ever be exposed to Mars' low-gravity natural environment.  Cohagen's head bursts in a beautiful array of reds, oranges, and purples.  The players on the field puke, and the crowd goes wild.  Some cheer, some stare in horror, some take their children and leave, never to watch baseball again.

Quaid thinks to himself, "now we're getting somewhere!"

Kuato warms up, and his 102-mph bullpen session is a thing of the past.  He's hurling it at 110, 115.  None of the players on the Cubs feel they have a chance to, for one, relieve themselves of the distraction that is the presence of Kuato, and then also hit a 115mph heater.  His change-up is 57mph.  There's no way this ends well for the Cubs.
Posted by Frank at 7:47 AM No comments:

Here's something I was inspired to write today.  Not sure if you can call it "inspired", but if you ever wanted to know what goes in that gray matter I call a brain while I'm at work, here you have it.

This will likely be the shell of an Amerika post as I continued on to compare our adult work days (for many of us) with a typical children's school day and how the education system errs in focusing on this same idea of individualism, but ultimately leaning toward collectivism or conforming.


How do we know we're human?

Seems like a loaded question and a poor attempt at philosophy, but drop the pretense for a moment.

You walk into a building at which you're employed.  You feel businesslike - coat, computer bag strapped over shoulder, maybe a cup of coffee or tea in hand.

You walk into the elevator with others who look similar.  Buttons are pressed on a keypad to take you to your location.  Your eyes venture all over, as long as they do not stare into someone else's eyes.  Brushed aluminum or stainless steel walls in this contraption affirm your businesslike presence.

At this point, are you not just an extension of the mechanisms you focus on, you interact with, you rely on just to begin a day of productivity?  Or is there more?

What we see when we walk into work, despite attempts at warmth like seasonal decorations in an otherwise drab, too-shiny lobby speaks to the part of us that needs to feel accomplished.  Ironically enough, our individualism may ultimately lead to collectivism in many aspects of our lives, because many of us want the same thing with different labels or at different prices.  Misguided though it may be, we believe the Polo socks, Banana Republic pants, and Claiborne shirt are enough to announce us as different, even while we herd into metal elevators and stroll over to our cubicle space.

So, again: how do we know we're human?

Many of us leave the workplace each day with the intention of catching up on television or hitting a local bar.  Either of those activities may make us feel alive but when the TV is turned off or the bar closed, some may find themselves limping home or to bed, tired enough to engage in that wonderful activity called sleep.  This allows us to turn off further thought until the next morning, when the process begins anew.

What about those annoying bodily functions?  You salivate in the elevator, swallow a bit too deliberately as a result, and cough up a storm.  Others in the elevator pretend not to notice, but they do.  What about germs?  Is this person sick?  Did he cover his mouth - I was staring at the elevator's Inspection Certificate, so I have no idea!

Maybe you are sick, and later you feel it hit hard.  You rush to the bathroom to puke up your coffee and fruit cup.  Feel human enough?

Maybe you're stuck on a deserted road at night in your car.  But you don't have a 2011 model, not yet, you have a 2006 or 2007 vehicle that doesn't have OnStar.  Your cell phone is dead.  You get out and walk toward a gas station - forced interaction with strangers in an unfamiliar environment.  I bet you feel even more human now.

From bodily functions to unplanned social interactions, we are human to the core.  The lack of balance in our lives is embodied in that steel cage-like elevator and mindless job fit enough for a robot.  We don't try to fix what's wrong with our processes - the ones that drive us each day to get up, shower, arrive at work dreary-eyed and only motivated enough to do what's necessary, nothing more.  That is human to a tee, and unfortunately it's completely normal for our species.

Do I need a rant/soundboard? Wife, best friends, and even a co-worker now tell me I do. Guess I bitch so much they'd rather see me bitch online than bitch at them.

What brought the renewed interest in a Me soundboard/rantboard was, what else?, THE MEL TAPES!

http://www.youtube.com/watch?v=Kbb--sJGGHs
(look under YouTube user 'LEARNINGCHORDS' by going to this link and you'll find ALL TEN Mel rants currently out there)

So...soundboard? I was inspired when I saw the first Maddox/Best Show In The Universe episode on YouTube recently (click here).
Posted by Frank at 2:44 PM No comments:

My blogging at Corrupt.org and Amerika.org is, I think, going well - especially in light of the fact that we now have an eight month old baby getting ready to run around our house. Lots of changes...and most of what I have to say is on Corrupt and Amerika.

Only other item of note is that I have begun writing what may either be a short story or a novel. Hopefully it's not lame. If it is, I will kill it and throw it into the recycle bin.

We love our new community, our new house, our new son. We're blessed. That's about it for now.
Posted by Frank at 1:09 PM No comments: